I just read Wally Bock’s article on Leadership and Legacy. It got me thinking about my past managers and their leadership styles. In Bock’s article, he quotes his father who told him “you’re alive as long as they tell stories about you.” Ideally, those are good stories.

My first boss, Paul Hefner, was vice president of marketing at Western Bancorp, a holding company for 24 banks in the 11 western states.  I joined the newly formed 3-person marketing department at the holding company after I graduated from Thunderbird School of Global Management.

He introduced me to PERT Charts. Despite my recent graduate degree in international management, I had not yet created a PERT or a GANTT Chart. At this job, I could not submit any project proposal without doing a PERT Chart. These charts often grew into complicated flowcharts of boxes with connecting lines. I called them octopus charts. By the time I had drawn all the task boxes and connecting lines between them, the drawing looked very much like an octopus with tentacles. It also had several go/no go milestones at various intersections along the way (see the example below from Toggl.com). 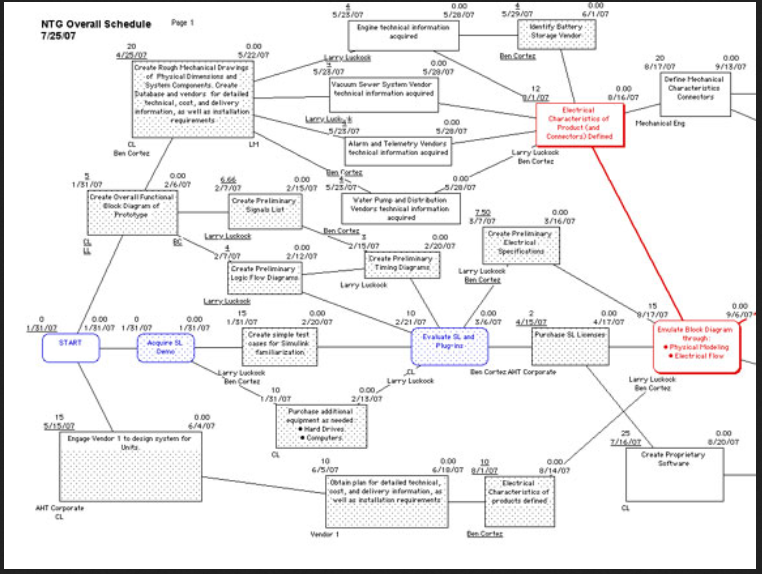 Along with this PERT chart, I had to submit a very detailed task list. It listed every activity, the date it was due, and who else needed to be involved. It was time-consuming to create because back then we didn’t have computers. It was all drawn out by hand. The task list was done first on paper and then typed up by the typing pool. Yes, we had a department of 30 typists who did all the typing on electric typewriters! Do you remember those days?

If you’ve every done a task list like this, you know what I’m talking about. You start listing the big tasks which then stimulate your thinking about the smaller ones that have to be done before the big one is accomplished. Consequently, you have to start the list over to put all tasks in priority order. Thank God we have computers now!

I didn’t know it at the time, but Paul had introduced me to strategic project planning. I think of him every time I need to put a project together. I may not do the complicated PERT chart now, but I do list out every task, due date, and resource needed in Excel. Fortunately, it’s easy to re-order them as priorities change. Paul taught me to think through every possible angle and priority before launching a project. He then gave me the opportunity to bring it to fruition if it looked feasible. That helped hone my project management and cross collaboration skills. I needed to communicate with other departments to complete the tasks.

Mike Stansbury, CEO of National Decision Systems based in Encinitas, CA, was another leader I admired. I joined that company when it had just 75 people and was growing at 30% a year. What an exciting time to work in a highly entrepreneurial, fast-moving organization! Mike was what you call a “walk around leader”. He had an open-door policy –  anyone at any level could drop by and ask a question or make a suggestion. Almost daily he also walked through every department of the 5-story building to visit with employees. We each had opportunities to propose new ideas and take on new challenges if they seemed to have merit.

In my prior work with the banking organization, I had produced many sales and marketing conferences. So my boss tapped me to produce the first client conference for National Decision Systems. One day as I was writing a recap of the event, Mike dropped into a chair in my office to ask me how I thought it went. I was surprised and a bit nervous to have the CEO in my office. I gave him my impression of what went well and where I felt we could improve. By contrast, he commended me on the clients’ feedback, adding that the company actually generated new sales as a result. Before that, I had not considered sales as a metric. My focus had been on the event itself and all the behind-the-scenes details that the attendees never knew about. Even though I wasn’t directly responsible for revenue generation, I was a valued member of the team contributing to the organization’s success.  Mike had created a culture of open communication and collaboration across departments. I thrived in that environment.

In my estimation, these two were great leaders. I was fortunate to learn from them as I honed my own leadership skills. They helped shape my values and leadership style as I progressed in my career. I continue to learn and adapt which I believe are critical components to creating a culture of curiosity, learning, open communication, and collaboration.